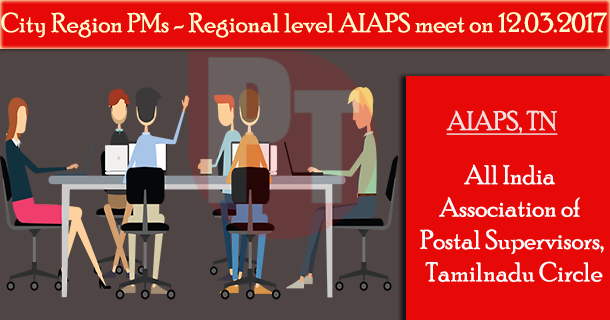 You are all well aware of our AIAPS union achievements and settled all the pending subjects of supervisory cadre. AIAPS turned out to be a fully functioning Union in Tamilnadu and getting all the due rights from divisional to circle level


In this juncture to enrol the left out the PMs in 2016 campaign, two regional level meetings were planned at Chennai City Region and Western Regions.

March 12th (Sunday) AIAPS chennai city regional level meeting will be held at triplicane post office at 0930hrs to enrol the left out PMs of CCR PMs in our AIAPS association.

Office bearers will be elected on the same day for the divisions which are not already having divisional body at CCR.

This year 2017-18, along with LSG line officials, All the PM Grade officials may kindly be united in AIAPS to achieve many more success like 2016-17.